In Thailand’s deep south, torture is devastating communities. But one woman is trying to stop the violence by documenting abuse and offering therapy in its place.

Anchana Hemeena’s work is all about ending a system of violence that has long haunted Thailand’s troubled southernmost provinces.

Her days often begin with a phone call or text notifying her that someone was ill-treated while in state detention. Quickly grabbing her notebook and phone for recording, she races to the victims’ homes to talk to them face to face.

“They used many ways of torture, they used beatings, electric shocks, sleep deprivation, they covered their heads with plastic bags,” Anchana says. “They also used isolation and intimidate them in many other ways.” However, in recent years, many of the most violent methods, seemed to have stopped.

Anchana has documented almost 150 cases of alleged torture in Thailand’s Deep South since 2011. She founded Duay Jai (“Hearty Support”), an organisation that promotes human rights and the prevention of torture after her brother-in-law was arrested and allegedly abused in 2010. The group also protects women and children and warns communities about the reality of enforced disappearance, an overlooked problem that casts a shadow over the southern region.

“They suffer from mental health and physical problems after the abuse,” Anchana says. “After being isolated from their community for so long, they often develop problems with domestic violence in their families because of their mental health issues they have after their release.”

But Anchana believes that the torture victims, almost always suspected armed combatants, deserve to be freed from their pain through therapy.

Duay Jai offers rehabilitation programs for the victims and their families. They use counselling and art therapy to ease the long-term pain. She explained that much of the trauma surfaces after victims return to their families and that the torment can last for years.

“This is not good for the peace process. Because many of the men become very angry and then they want revenge,” she says. “Sometimes they want to use [domestic] violence again.”

Though the trauma never fully leaves the victims, Anchana says art therapy can have long-lasting positive effects. Aside from counselling, Duay Jai invites dozens of families every year to art therapy sessions where they use drawings and paintings to help rebuild lost connections within the family. In 2019, Duay Jai hosted an exhibition where victims presented their paintings to their communities in the hopes that the community would understand them more deeply.

“Some torture victims don’t want to talk about their experience because they don’t want their family to worry,” Anchana says. “After they come home, they don’t talk about it, but then the depression comes and it makes them lose control. Using therapy, we encourage their wives and children to join in the rehabilitation process. It really helps.”

“This is not good for the peace process. Because many of the men become very angry and then they want revenge.”

The ill-treatment of suspects by the authorities can be seen as a symptom of the slow-burning conflict in Thailand’s southernmost provinces, where an insurgency is fighting for independence or greater autonomy for the regions’ Malay Muslims.

Since the conflict was re-ignited in 2004, security forces have been picking up men off the streets – stereotyping them as radical separatists waging war for independence. But often, the victims of torture were simply in the wrong place or were associated with the wrong person.

Since then, the conflict has caused over 7,000 deaths and over 13,000 injuries. Although the violence is slowing down, bombings, gunfights, and targeted killings still happen with some frequency. The Barisan Revolusi Nasional (BRN), the main separatist group controlling most of the conflict’s insurgents, still uses guerilla-warfare-like tactics against Thai security forces.

Malay Muslims are a tiny minority in predominantly Buddhist Thailand, but they make up about three-quarters of the population in three southern provinces bordering Malaysia. The conflict has created tensions between Thai-Buddhist and Muslim-Malay communities that often live side by side. Insurgent groups have historically targeted Thai Buddhists, including teachers and government workers they feel are symbols of the Thai state. The authorities then retaliate, perpetuating a cycle of violence.

Rights defender groups like Anchana’s Duay Jai that work to uncover state-sanctioned torture and offer support to the conflict’s victims, often get caught between the fronts making their efforts a dangerous line of work.

In May 2016, Thailand’s Internal Security Operations Command (ISOC), a military-controlled national security agency, sued Anchana and two other human rights defenders, Pornpen Khongkachonkiet, director of the Cross Cultural Foundation, and her colleague, Somchai Homla-or, for defamation. The activists believe the case was a direct response to their work.

“The defamation case was a total lie,” Anchana says. “It’s not right at all, it was wrong to use defamation charges just because I talked about the situation of our people in our country. I understand that they want to protect the country, but they feel that security is more important than the people in rural areas.”

ISOC later dropped the criminal defamation lawsuit and other charges in March 2017. But not long after the withdrawal of the defamation case, Anchana discovered an online smear campaign was underway against her. Sitting at home in late 2019, she was busy monitoring reports of violence from her computer. Suddenly she noticed an account on Facebook featuring a photo of her with an abusive headline. In the next few days, more defamatory posts turned up. It became clear that this was a coordinated campaign to discredit the human rights defender.

After weeks of pushing Facebook, the social media platform finally removed the accounts in March 2020. Facebook found the accounts were involved in an “information-influencing operation run by the military”. Prominent members of parliament also released documents showing it was a state-sponsored campaign.

“I was scared that the comments could get so bad that they would encourage people to kill me,” Anchana says of the smear campaign.

Pornpen Khongkachonkiet from the Cross Cultural Foundation, a rights group in the South that also documents torture, believes a failure to criminalise torture and enforced disappearances has led to a “climate of impunity” in the region.

After years of continuous violence, many communities are picking up the pieces. The violence is slowly subsiding, and torture cases are reportedly decreasing. This month, another round of peace talks between the Thai state and the leading insurgent group Barisan Revolusi Nasional (BRN) began in Malaysia. But Anchana fears that the situation could deteriorate again quickly. She stresses that rights defenders like herself must not become complacent. The work must continue.

“There’s been so much impunity,” Anchana says. “We can’t slow down, because if we do and we stop monitoring these cases, then it could all begin again. After people started dying inside detention, the military leaders started to worry. It made people around the world know that torture was happening. And I think this was the turning point.”

Thailand’s government has now been making substantial moves towards rectifying their problem with torture and ill-treatment. A draft bill criminalising torture and enforced disappearance is currently awaiting parliamentary approval.

Nareeluc Pairchaiyapoom, director of the International Human Rights Division, Rights and Liberties Protection Department, the Ministry of Justice, says they are doing more now than ever to address the state’s torture problem.

“The situation is improving,” she says. “We have found that the number of torture complaints is also dropping.”

The Ministry of Justice and the Association to Prevent Torture (APT), an international anti-torture organisation based in Geneva, have recently started collaborating in a milestone project to reduce torture in state detention.

Shazeera Ahmad Zawawi, a human rights advocate and researcher at APT says that the project aims to build confidence in the government and help promote the importance of strengthening detention safeguards during the first hours of police custody. The group developed an anti-torture handbook as a reference for government officials and law enforcement officers on how to understand different aspects of torture prevention.

“The anti-torture law has been discussed in Thailand for more than ten years,” Zawawi explains. “And it’s a very important piece of legislation, because once you criminalise torture, you can start taking action against perpetrators.”

She adds that the collaboration would continue over the coming three years. APT will focus on how forced confessions and incommunicado detention violate human rights – they hope to dissuade authorities from utilising harmful tactics in the future.

“We can’t slow down, because if we do and we stop monitoring these cases, then it could all begin again.”

The last few years have been increasingly stressful for Anchana and her team. The COVID-19 outbreak has made reaching and consulting with new victims more difficult. She says that the pandemic has created divisions and forced communities to close in on themselves even more. But like so many other challenges, Anchana is confident that she will push through.

Today, Anchana is calling for justice for the smear campaign. On 4 November 2020, she and human rights defender Angkhana Neelapaijit, who was also targeted, submitted a complaint to the Bangkok Civil Court against ISOC. She demands a public apology and millions of baht in compensation for damages. Her case is scheduled for review in court in May this year.

Yet whether Anchana receives justice or not, she says she will keep documenting the violence. It will take a lot more to stop her from helping victims of one of the world’s most forgotten conflicts.

“I do this because I’ve also received so much help,” Anchana says, referring to the time when her brother-in-law was ill-treated in detention. “I want to give back, to support others who have faced the same pain.”

The photography accompanying this story was originally commissioned by the Association to Prevent Torture (APT) who helped facilitate access.

Caleb Quinley is a freelance journalist based in Bangkok. He writes on Southeast Asia with a focus on Thailand. He was raised in both rural and urban Thailand and has long been interested in regional affairs, politics, and contemporary issues that are changing the region. 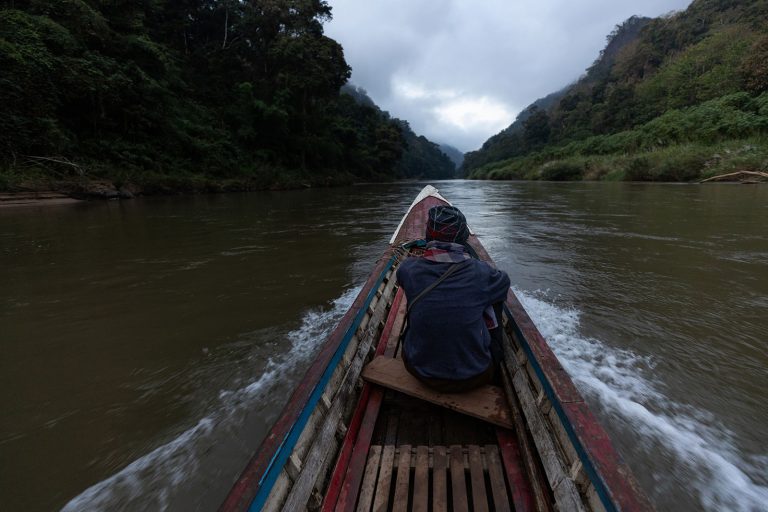 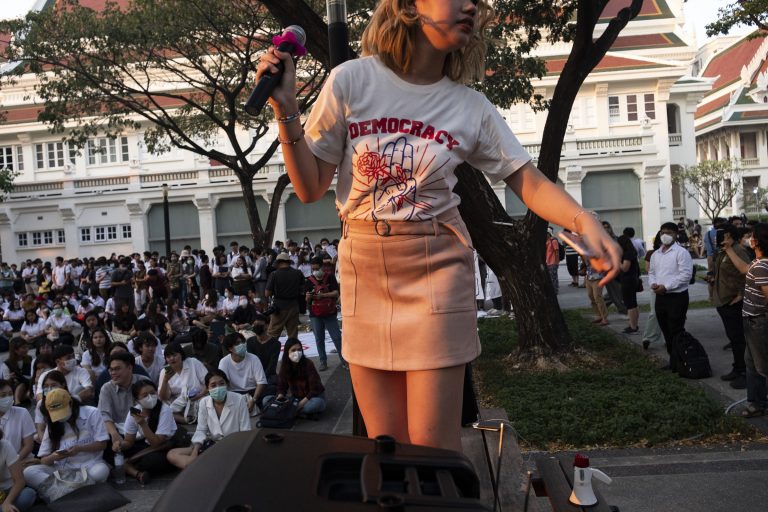 Vinai Dithajohn, a visual chronicler of Thailand’s struggle for democracy