Lertsak Kamkongsak, the activist who battles mining with community building

In April 2020, a lone middle-aged man installed himself in a camping chair on the pavement outside the Supreme Court in Thailand’s capital. The police looked on as he announced a hunger strike, demanding the release of political activists who had been arrested earlier for participating in a youth-led democracy movement against the government.

A few months earlier, the same man was at the heart of another protest movement hundreds of kilometres away in a remote rural area of Thailand’s Northeast. He spent day and night with a community that had set up a roadblock to shut down a polluting stone mine after a 30-year-long struggle.

Lertsak Kamkongsak, is one of Thailand’s most prominent human rights defenders and a co-founder of The Commoners Party, an idealistic left-wing political party. It was formed in 2019 by like-minded activists and NGO workers as a political vehicle to enable villagers to petition parliament directly and amplify their voices to be heard by those in power.

A visit to the Green Party in Australia had shown Lertsak how NGOs, activists and students could form a political party to keep the struggle for the environment focused, how to nurture and rally movements and how to gain strength by having a political party work side by side with NGOs.

This strategy shaped how he has worked for the past few decades. Sitting outside the Supreme Court on a political hunger strike or in a make-shift shelter in a rural anti-mining protest camp, for Lertsak, it is all part of the same struggle for justice and equality.

In a way, Lertsak has followed in his father’s footsteps, a security guard at a steelworks in Saraburi province in central Thailand. His father enjoyed reading political journalism and worked as a union representative.

At the steelworks, workers didn’t get the same benefits as the main office’s employees who received much better healthcare. Lertsak’s father raised concerns about this injustice and became the president of the worker union. Eventually, the workers succeeded.

“I was still very young, but they talked about it at home, how my father needed to carry a gun to protect himself and how my mother was worried about his safety,” Lertsak remembers.

Saraburi, a heavy mining area, is considered the centre of Thailand’s cement industry.

“I lived quite close to a mine in the countryside. My family home was always full of dust, spread by the trucks that passed carrying stones. That is my most vivid childhood memory.”

Lertsak completed a degree in microbiology at Bangkok’s Ramkhamhaeng University, hoping to pursue a Masters. Instead, he started working with the Thai Volunteer Service, a program that sends young Thais into the provinces to experience human rights issues facing local communities first-hand.

“I developed my opinions and feelings towards our society, economy and politics while at university. I saw that there was injustice and I wanted to know if I could really work in the field,” Lertsak says.

He began working with an organisation that assisted a local community in trying to stop the construction of the Songkram Dam, on a tributary of the Mekong River. The area, like much of northeast Thailand, sits on a bed of potash, a type of rock salt used to make fertiliser and companies had already started exploration of the potash. One of the major reasons for the community’s defiance against the dam was that they feared the changes in natural water flow would disturb the potash and lead to an increase in water salinity.

Lertsak already knew about the issues around mining projects thanks to witnessing an anti-potash mining campaign in Udon Thani. But unlike the well-organised campaigns against dam projects, resistance to mining was barely organised and there was little connection between campaigners addressing different resources like gold, coal or potash. Lertsak felt that the creation of an effective network was vital, if these campaigns were to enjoy the same support as other anti-mega-project movements.

In 2010, Lertsak founded The Project for Public Policy on Mineral Resources (PPM) and encouraged community members from anti-gold mining communities in Loei and Phichit to establish the Network of People Who Own Mineral Resources.

During the early days of PPM, Lertsak and his team worked exclusively with the anti-gold mining community in Phichit province in northern Thailand. But since PPM has received some funding, the organisation has expanded and currently employs eight staff who assist ten grassroots communities impacted by mining, in different parts of the country.

“Their asset is the way they work hand in hand with other women/human rights defenders. Women are the first to experience what is happening to the water, how their land is being contaminated, and the consequences this has on their and their families’ health,” Lertsak says. “Environmental damage affects the ability of women to provide food and clean water for their families and communities.”

The case of Dong Mafai

In 2019, while campaigning for the Commoners Party, Lertsak was introduced to the community living in Dong Mafai district of Nong Bua Lam Phu province.

In 1993, a local mining company set out to harvest a limestone outcrop called Phu Pha Huak for its stone. Fearing the mining’s environmental impact and infuriated by the lack of public consultation, the villagers organised protests to stop the project.

The response was harsh. Four community members were shot dead, two in 1995 and two in 1999. More than 20 years later, when Lertsak visited with his team, a divided and tired community was still trying to close down the mine.

“We decided to try and get the mine closed down. There was a window of opportunity,” explains Lertsak.

First, Lertsak and his team spent a year living with the community, to create a new movement, a new action plan, and to build trust.

“There had been several court cases between the villagers and the mining company. The court had accepted the villagers’ plight in one instance only to reverse its decisions in the next. We had to come up with a different approach,” Lertsak remembers.

“The community organisation really needed strengthening. When we arrived, there were only a few active leaders pursuing the struggle. We made sure that everyone in the community became involved again.”

After spending a year building relationships and empowering the community, Lertsak noticed that various mining permits were about to expire. Fearing the company would renew the permits, the community decided to block a road that led to the mine. What began as a makeshift temporary roadblock, has become a permanent fixture that still blocks the mining company from returning.

Between a rock and a hard place

Challenging mining companies is a risky proposition in Thailand. Thai media frequently report on high-profile cases of communities being sued, its activists intimidated and killed. According to research by the NGO Protection International, there are nine verifiable cases of people who have lost their lives while trying to shut down stone mines. Dong Mafai includes four of those cases.

“Stone mining requires very little investment, but the profit is extremely high and so it’s usually an activity that local influential people, including businessmen and politicians, like to get involved in. That’s what makes opposition dangerous,” Lertsak explains.

Lertsak experienced this first hand in late 2020 when he received death threats after being singled out as the ring-leader and instigator of the Dong Mafai protest, which made him fear for his life.

Villager Pornpan Anuwech, 52, spent more than one year working as a guard at the protest camp. Along with other volunteers, most of them women, she was responsible to keep Lertsak safe and when there was a threat against him they reacted fast.

“If they use violence, we’re ready to fight. We wanted to take the best care of the chief (referring to Lertsak) because he was here to help us. We dealt with the situation very quickly. We took him to a safe place,” says Pornpan.

Pranom Somwong of Protection International, an NGO that works very closely with community-based women/human rights defenders and has collaborated with PPM on several high-risk cases, explains, “The extractive industries do not really provide the development they promise; instead, they mess up people’s lands and livelihoods, force relocation of communities, propagate economic, social and gender inequalities, and permanent environmental destruction.”

Pranom adds, “Lertsak dedicates himself to the protection, defence and promotion of community rights, especially environmental and social justice without fear nor favour. He works hard to empower young women and human rights defenders to grow and assume leadership in PPM.”

“Lertsak dedicates himself to the protection, defence and promotion of community rights, especially environmental and social justice without fear nor favour.”

Back to where it all began

In March 2022, Lertsak found himself in a house in the village of Ban Khao Mo, in Phichit province. It was a moment of deja-vu, because Lertsak had been here years early when he had first tried to help this community.

The Chatree Gold Mine is Thailand’s first and largest gold mine, operated by Australian company Kingsgate under Akara Resources, a Thai subsidiary wholly owned by Kingsgate, since 2001. Its operation has been plagued by accusations listed in a letter sent to Thai opposition parliamentarians in early February. Local environmental defenders and village representatives claim that the previous mines had created “deserted villages with broken families” located by “waterways polluted by heavy metals”. The villagers also claimed that the company had eliminated buffer zones between mines and villages.

The house in which PPM was now meeting local villagers was one of just a handful that had not been sold. It stood surrounded by land owned by the mining company.

In 2016, official health tests established that local villagers living around the mine had above normal levels of cyanide and arsenic in their blood. This led Prime Minister Prayuth Chan-ocha, then leader of the military government, to invoke a special section of the interim constitution called “Section 44”. Amidst environmental and health concerns, the Chatree mine was closed.

While the mine closure appeared to be a victory, Lertsak and others involved with the case strongly doubted this to be the right strategy. Closing a large international company by decree, Lertsak rightly suspected, would lead to international court cases, with the potential to further damage to both Thailand and the local community.

For the past five years, Kingsgate has been suing the Thai government, demanding 30,000 million THB (about USD 860 million) in compensation for the closure of the mine. A conclusion to the case is expected soon with the government allegedly granting four more mining permits to Akara Resources. The company has reported that it is being welcomed back.

“To be honest, I think it has come to the point where it’s either relocating the communities or not reopening the mine at all,” says Lertsak.

“We need to show what the reopening of the gold mine has done to the community. Right now, all they talk about is how the government has failed to deal with the Australian company. Let’s tell parliament about the lives and blood of the people instead.”

Luke Duggleby is a Bangkok based photojournalist. He regularly works on stories related to the environment and the impact of pollution and development on local communities. 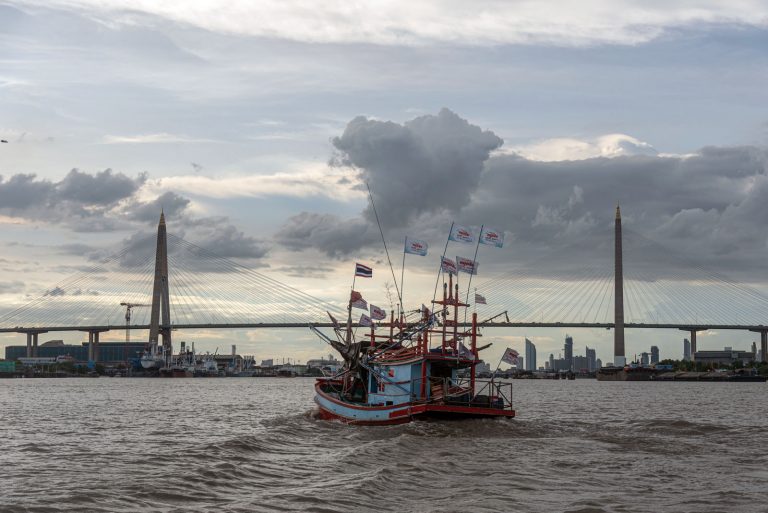 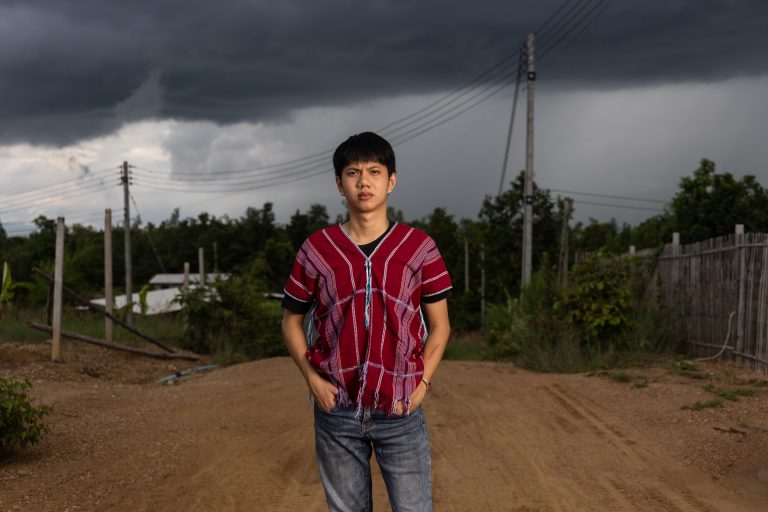 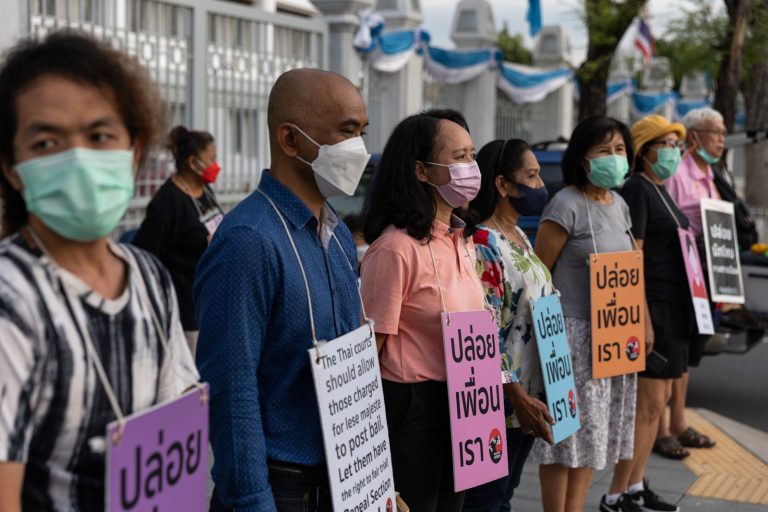