One last stand: How a community in northeastern Thailand shut down a stone quarry

Story and photography by Luke Duggleby

Sorn Khamjem carefully made her way around her husband’s grave, sweeping the forest floor and meticulously removing leaves and twigs that had fallen down. Going against Thai Buddhist tradition, Sorn and the community had decided not to cremate Tongmuan Khamjem’s body until they received justice for his murder.

Twenty one years later, on a hot and humid morning, Sorn and hundreds of other villagers sat in a convoy of pickup trucks on the way to Nong Bua Lamphu Provincial Hall to fight for that justice.

Sorn sat quietly in the first truck, thinking about how they had made this same journey before, just after Tongmuan was killed.

In the early 1990s, a conflict broke out between communities surrounding a collection of limestone outcrops in Nong Bua Lamphu’s Suwannakhuha district and a private mining company determined to mine one of these mountains for stone. Fearing the mine’s environmental impact and infuriated by the lack of public consultation, a local community group tried to stop it, organising protests and voicing their concerns.

Shortly after, the community was rocked by a series of shootings that left four of their members dead, two in 1993 and two in 1999. Sorn’s husband Tongmuan, chief of Dong Mafai sub district, was ambushed and killed while riding a motorbike on a quiet country road.

The mining company had approached Tongmuan to get his approval for the project. “But he refused, telling them he was on the side of the villagers,” Sorn recalls. Then, a few days later, he was dead.

Angered and saddened by the lack of progress in the murder investigation, Sorn and her community chose not to cremate his corpse. Instead, they loaded the body onto a truck and drove with 300 people to Nong Bua Lamphu Provincial Hall. With the coffin containing Tongmuan Khamjem next to them, they stayed for three nights, sleeping outside on the ground in an attempt to pressure the local government and police to act and arrest the perpetrators.

“After three days, no one really cared or showed interest, so we returned home,” Sorn says with sadness in her voice.

Little did she know, twenty years later, she would take this very same trip in another attempt to pressure the government and seek the closure of the mine. But this time, if their calls fell on deaf ears again, they had a backup plan.

A few years after Tongmuan’s death, the community had a glimpse of hope when the Nakhon Ratchasima Administrative Court revoked the company’s permit to utilise parts of the mining area as it had failed to fulfil regulatory requirements.

But six years later, in 2010, Bangkok’s Supreme Administrative Court overturned this decision. The company’s permits, a forest utilisation permit and a mining permit were renewed until September 2020.

With the mining permit approaching its renewal date in fall 2020, the community group dialled up the pressure on the local government to make sure the mine would be shut down permanently.

“We have been fighting against the quarry for 26 years since I was 40 years old. I want it to end in my generation,” said Lamduan Wongkhamchan, 66, a core member of the community group, just days before the meeting with the Governor. “I don’t want the younger generation, my children and grandchildren to have to continue this struggle.”

“We have been fighting against the quarry for 26 years since I was 40 years old. I want it to end in my generation.”

On 13 August 2020, several hundred members of the anti-mining group arrived and immediately descended onto the steps of the provincial hall, filling them completely. Observed closely by security officers, they shouted slogans and called for the mine to be closed until some were allowed to enter a large meeting room.

In their negotiation with Deputy Provincial Governor Wiangchai Kaewphinit, the community members used carefully collected data and cited sections of the mineral act. They made a strong argument for the immediate closure of the mine and the need for environmental restoration of the damaged forest.

After several hours of heated discussion, community leaders concluded that the government would not listen to their calls just like twenty years ago.

“We have provided evidence of the illegality of the mine and told you what the law states. You have the power to stop the mine today but you still refuse to do so,” said frustrated community representative Juthamas Srihattapadungkit who works with the Network of People Who Own Mineral Resources.

Then, the meeting abruptly ended. The comm­unity members rose from their seats and shouted “If you aren’t going to close the mine, then we will!” and marc­­­hed out.

This wasn’t a mere threat but a calculated plan that had been formulated since early 2019. The anti-mining activists jumped into their vehicles and drove back, but this time to blockade the main road leading to the mine.

“If we had organised the blockade straight away without the meeting, it would have been an incomplete picture. It was to point out that the state mechanism failed to shut down the mine,” says Lertsak Khamkhongsak, from the Campaign for Public Policy on Mineral Resources, an NGO that helped to organise the blockade.

The community members who blocked the entrance to the quarry are part of the Khao Lao Yai-Pha Jun Dai Forest Conservation Group from Dong Mafai District. They estimate that about 4000 people in six villages are impacted by the mine’s daily explosions that cause the ground to shake, houses to crack, and debris to fall.

The mine occupies 28 hectares (175 rai) of community forest, preventing locals from collecting mushrooms, bamboo and herbs like they have done for generations.

In addition, many of the rocky outcrops in the area are sacred religious sites, with nearby caves full of thousands of Buddha statues and many other Buddha statues precariously balancing on the peaks.

Located nearby the mine, in shallow caves carved into a mountain, locals found several wall paintings. The Fine Art Department of the Ministry of Culture verified the ancient murals that date back 3000 years, designating them as archaeological sites.

Locals have questioned how the mine can continue to operate when mining laws state that forested areas with a watershed or archaeological sites must be exempted from mining activities.

With the combination of religious and historical sites, local people hope the area can one day attract tourists, but for that, the mine would have to close down first.

The community group had selected a strategic location for the blockade of the mine, located at a junction of the only access road for the company’s trucks and close enough to the main road to be visible to passersby.

What began as a makeshift camp of car tires and tarpaulin grew into a semi-permanent settlement of concrete barricades and wooden structures. Since that day in August 2020, the site has been occupied 24 hours a day to ensure the mining company won’t return.

On the day the forest utilisation permit expired in September 2020, the community held a protest march entering the quarry for the first time.

Sheltering under umbrellas in the sweltering heat, they performed a ritual to appease the spirits of the area before lowering a large banner that read, “Stop the mine in our generation!”.

The community is determined to stay put despite various threats directed against the group, including online death threats against Lertsak Khamkhongsak. They want to keep up the blockade until they feel confident that the mining license won’t be renewed.

After almost three decades, the community hopes to finally shut down the mine and end this sad part of its history. This was especially important for Sorn Khamjem because it meant that her late-husband Tongmuan would be laid to rest. For more than twenty years, his body has been lying in a concrete tomb, a single grave in a community forest near the village.

“We decided that if we cannot shut down the mine then we will not cremate his body,” Sorn said.

Sorn and other members of the community also want the police to reopen the murder case of her husband and the other three rights defenders as they believe missteps and shortcomings hampered the investigation 20 years ago. In an attempt to finally end impunity, last year in October, they collectively submitted a letter to the local police asking the authorities to reinvestigate the murders.

While the mining company might attempt to reclaim the mine, local residents are already looking to restore the forest that once covered the quarry by planting tens of thousands of tree saplings.

“The mining site was once a forest providing food and herbs to the local community,” said Anuta Riangnong, 58, one of the women leaders of the group. “We want to see the same abundant forest again. We don’t want the company to be present here anymore. We will guard [the entrance of the mining site] while watching our trees grow.”

Luke Duggleby is a Bangkok based photojournalist who frequently documents environmental community struggles. In 2018, he was awarded for his contribution in covering human rights issues in Thailand by the National Human Rights Commission. 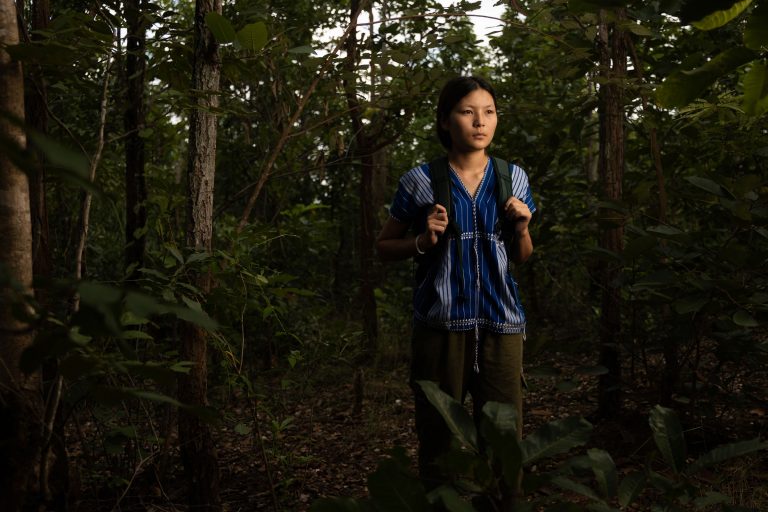 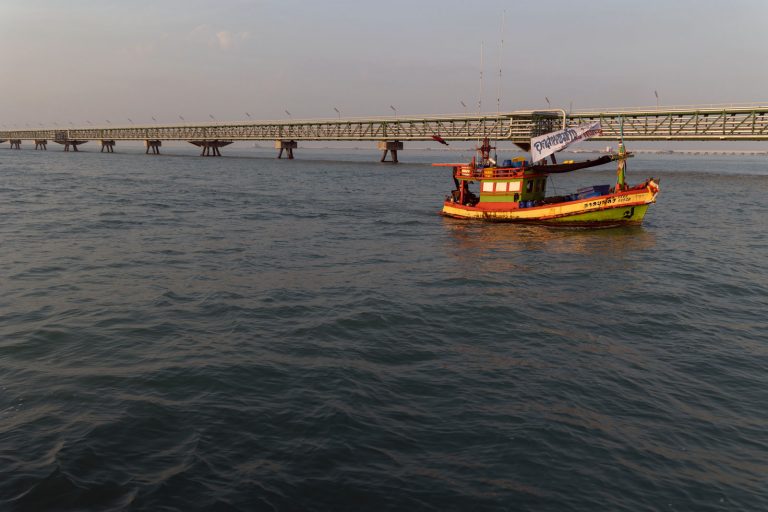 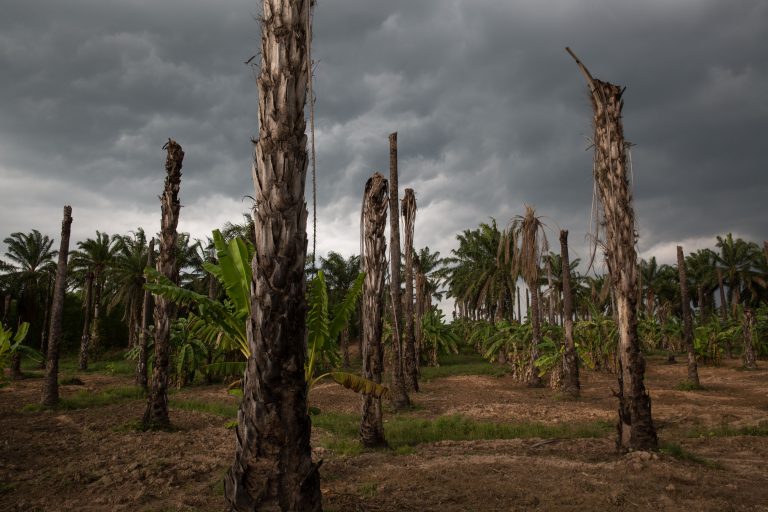 After shootings and killings, a village in southern Thailand hopes for land rights recognition