They used to call him all sorts of names. Not just the neighbourhood kids or the teachers at school, but even his own parents back at home, they had all spurned him, making him feel less human with each word they said.

“I remember being asked why I couldn’t have been born normal like other people,” says Patchara Kumchumnan. “They said to my face that being born gay was a waste of life.”

It’s taken him a few years and some hundred kilometres to escape the prejudice and hatred in his hometown. But, while the scar of discrimination never faded completely, the experience became his driving force to defend the rights of others.

It led the 25-year-old to become one of the leaders of the #SaveBangKloi Coalition, a campaign raising public attention to the human rights abuses against Thailand’s indigenous Karen community.

The pain of injustice

Raised by his grandparents, Patchara spent his childhood playing with his female cousins in the northern province of Chiang Mai. He dressed like a girl and loved to dance, and it was never a problem — until he moved to live with his parents in Ang Thong in the central region.

They were strict, conventional government officials, as Patchara describes them. His mother wanted him to ordain as a monk — a traditional rite of passage for Thai boys — and his father pushed him to play football. And when the boys in his team called him a common slur for gays, it didn’t seem to bother his father.

“‘Well, you really are like what they say, aren’t you?'” his father asked him, Patchara recalls. “Back then, I really believed that being gay was wrong because of what everyone blew into my head.”

In an attempt to make up for what was “wrong” with him, Patchara studied diligently so that at least his parents would have something to be proud of. He applied at one of the country’s leading schools in Bangkok, not just to gain his parents’ approval but to get as far away from them as possible.

It took him until the last year of high school to finally find the courage to freely express himself. Then, emboldened by his newfound self-esteem, he went on to study Communication Arts at one of Thailand’s most prestigious universities.

Two classes on journalism and human rights sparked something in him, and field trips to several communities fighting for land rights left a lasting impression.

“When we spoke to community members, we really felt their lives were hanging by a thread,” Patchara says.

“My job is to make them feel like they always have us by their side. So they can feel ready to stand up and fight.”

On graduating, he volunteered at the Northern Development Foundation, a civil society group advocating for the rights of indigenous people. An assignment to create a short video for a community’s annual spiritual ceremony brought him to Mae Laki, an ethnic Karen village in Tak province.

After a bumpy four-hour ride, he was welcomed by unfamiliar food he couldn’t eat and a simple lifestyle he wasn’t used to as a boy from the city. “I was really suffering,” Patchara says about his first visit to the village.

But that torment vanished the following day when he visited a ‘rotational field’ for the first time. “It was so beautiful, so full of life, to see dozens of villagers gathered in the same place to perform a ceremony to pay respect to nature,” he recalls.

Karen communities practice rotational farming, a traditional agricultural practice in which farming plots are switched regularly to preserve soil health. Farmers first clear and burn the land before planting crops, then after the harvest, they leave the soil to grow back into mature forests.

This indigenous agricultural ingenuity and fire management fascinated Patchara, and he wanted to protect the longstanding wisdom.

“When I saw Patchara at the village, it was like he completely shed his city kid persona,” says Ploy Sappayasarn, a close friend from university who went with him to the community.

Many in Thailand see rotational farming as a destructive agricultural practice, and indigenous communities have been accused of causing deforestation and air pollution during Southeast Asia’s annual “haze season”.

“There’s this encoding which assumes certain groups of people to act in certain ways,” Patchara says. “If you’re indigenous, you must be a migrant or a forest encroacher, or if you’re gay, you must be infatuated with men or be promiscuous.”

Patchara is determined to break these stereotypes and embody the change he wants to see. “He’s really devoted his spirit to his work, so much so that sometimes he forgets to take care of himself,” says Ploy.

“If you ask me whether I’m exhausted, I am, but it’s these small victories that keep me going.”

Three years on, Patchara now works full-time as a communications officer at the Northern Development Foundation. He also volunteers for the #SaveBangKloi Coalition, a group defending the rights of an ethnic Karen community locked in a land rights conflict with the state.

For generations, the Karen of Bang Kloi lived in symbiosis with nature amidst the Tenasserim mountains that straddle the Thailand-Myanmar border. They farmed vegetables, hunted small animals and lived in houses built from the timber they collected, caring for all the resources the forest provided.

But the community’s fate became uncertain when in the early 1980s, the government declared the area a conservation zone – the Kaeng Krachan National Park. Then, in 1997, the authorities forcibly resettled the Karen to a new location 20 kilometres away.

Despite promises of a better life, many were only given infertile, degraded land unsuitable for farming. Others did not receive any compensation because they lacked official documents to prove their Thai citizenship.

According to the government, the resettlement was mainly to border security concerns and efforts to protect the forest. But for the Karen, the government had taken away their rightful home. Unable to make a living and fearing starvation, some community members eventually returned to their old homes.

In 2011, in an attempt to drive the community off the land for good, park authorities burned almost 100 houses and rice barns. Then, in 2014, prominent Karen land rights defender Porlajee “Billy” Rakchongcharoen disappeared — his charred remains were later discovered in an oil drum in the park’s reservoir.

But despite these acts of violence, the Karen made another attempt to return to their ancestral home in March 2021. When they arrived, military officers immediately forced them into helicopters and flew them back, charging them with ‘encroachment’.

“I couldn’t stop the helicopters,” Patchara says. “I wanted to cry, but I knew I mustn’t in front of them.”

A few months later, Patchara received disheartening news. UNESCO had added the forests the Karen community once called home to the World Heritage List. Three earlier attempts to add the Kaeng Krachan Forest Complex to the conservation list had failed because of human rights-related concerns about indigenous groups living in the area.

At a #SaveBangKloi demonstration in Bangkok in March 2021, Patachara shaved his head and had himself chained in a symbolic protest accompanied by a crowd of Karen land rights defenders. He could no longer hold back the tears he’d suppressed for months.

“I see my friends still having fun like teenagers, but I can’t do that,” Patchara says. “I had to grow up as quickly as possible because, in this work, you can’t be too emotional as the communities rely on you.”

Despite the unfortunate events, Patchara has hope there can still be a solution for the Karen of Bang Kloi to be legally allowed to coexist with the protected forests. Since the protest in Bangkok, the hashtag #SaveBangKloi has trended online, bringing attention and awareness about the indigenous rights movement to the broader Thai public.

“If you ask me whether I’m exhausted, I am,” he says. “But it’s these small victories that keep me going.”

Thailand’s youth-led democracy movement also acted as a tailwind for the #SaveBangKloi campaign. Patchara believes that there is now momentum for urban dwellers and ethnic groups in the countryside to join hands in the struggle for equality.

And while there is still a long battle ahead for indigenous and democratic rights, Patchara believes that the country’s new generation is ready to stand up and fight for another.

Driven by the belief that people are all part of one nation, all equals, all humans deserving of the same rights, Patchara is ready to do what it takes to support indigenous groups defending the right to live on their ancestral lands.

“My job is to make them feel like they always have us by their side,” he says. “So they can feel ready to stand up and fight.”

Nanticha Ocharoenchai (Lynn) is an environmental writer and youth climate activist from Thailand. She frequently writes about the environment, science, conservation and sustainability.

Luke Duggleby is a Bangkok based photojournalist who shoots documentary and portrait photography largely focusing on environmental and human rights topics. 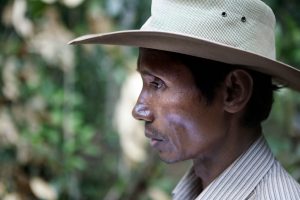 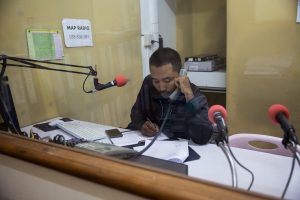 People’s Radio: a friend to Burmese migrant workers in Thailand 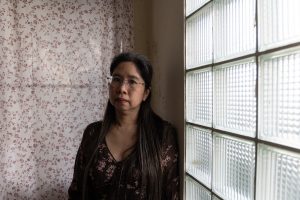 Ida Aroonwong: The book editor who safeguards the right to bail in Thailand