At the age of 18, Natthapan Saengtab crashed her motorcycle into a stranger’s car. It set off a chain of events that would see her parents lose their land, sending the family on a downward spiral. But against all odds, the fateful accident set Natthapan on the path to becoming a prominent land rights defender in southern Thailand.

“I was not an ideal child,” says Natthapan, now 31. “I caused my parents many troubles, and they ended up paying a high price.”

Natthapan, who goes by the nickname Nam, was born and raised in a family of farmers in Surat Thani province. As her parents did not have enough money to pay the car owner for the damage, they saw no other way than to sell their small plot of land.

With no land to live and grow food, and no more savings left, the family crowded into a small rental room paid for by the parents’ meagre incomes. The painful memory of that period has stayed with Natthapan until today.

In the early 2000s, a movement of landless farmers was sweeping through the South. After watching local authorities granting land concessions to companies for palm oil plantations across the region, hundreds of farmers started campaigning for the right to access agricultural land.

In 2008 they established the Southern Peasants’ Federation of Thailand (SPFT), a local organisation that assists landless farmers in attaining land. They created five communities in Surat Thani Province on the government’s agricultural reform land, known as “Sor Por Kor“. It allows landless farmers to use plots to grow crops, but it does not give them any ownership rights.

Natthapan’s parents settled in one of the communities called Santi Pattana, meaning ‘peaceful development’. The community adopted a collective land management approach that gave each household a plot of eleven rai of land for them to use. One rai is reserved for building a house and planting food for themselves. The remaining ten rai are used for collective farming that feeds the whole community.

Yet, despite the village’s peaceful name, life in the community did not stay quiet for long. A palm oil company, United Palm Oil Industry PLC, arrived and claimed ownership rights to some of the land where Santi Pattana had been established.

Natthapan, who had moved into the settlement with her parents, began taking part in the SPFT’s campaign to defend the community against the company’s claims.

At first, she volunteered to drive senior residents from their houses to the organisation’s meeting venues. Soon after, the SPFT leaders recruited her as one of 20 young new advocates of the movement.

It was an empowering experience for Natthapan to join the SPFT training activities and participate in its land rights campaigns. She also went on several field trips to visit other communities fighting for their rights to land in different parts of Thailand.

“It was an eye-opening experience for me, as someone who grew up in poverty and had little chance to access higher education,” Natthapan says. “Being a part of SPFT provided me with an opportunity to learn about the issues that matter. It also made me aware that my own voice matters as much as the collective voices of my community.”

The young woman soon grew into a prominent rights advocate for Santi Pattana and the organisation itself. Ever-present at the SPFT’s activities to educate and support the community’s fight for land rights, she also often travelled to the capital to meet with government officials.

“But if I, or other land rights defenders, aren’t at the frontline of the movement, the land of the future generations may fall into the hands of private companies.”

Between 2008 and 2009, United Palm Oil Industry sued 15 members of Santi Pattana in two separate cases for mischief and trespassing on 1,486 rai of land. As a result, the Lower Civil Court ordered the eviction of the 15 residents in 2012.

Refusing to move out, the community petitioned the Surat Thani Provincial Governor to set up a committee to review the land title deeds owned by the company. The investigation found that the company was using both legal and illegal land documents to lay its claims.

Armed with this new knowledge, members of Santi Pattana filed a complaint with different government agencies, including the Office of the Prime Minister, Office of the Ombudsman, and the National Human Rights Commission (NHRC). As a result, the NHRC concluded that the company had no ownership rights to the community settlement.

Finally, in 2021, the Administrative Court ruled that the community had, in fact, settled on the government’s agricultural reform land. It ordered the Surat Thani Provincial Land Office to revoke the illegal land documents obtained by the company.

“We were very pleased and happy to hear the court ruling,” Natthapan remembers. “It took us more than a decade to prove our rights to live in our settlement.”

After their legal victory, Santi Pattana was able to live up to its name. It stood as an encouraging example of a community using the justice system to defend its rights.

But Natthapan and other people in Santi Pattana knew that their peace was a fragile one. Other SPFT communities like Klong Sai Pattana, some 40 kilometres away, continued to be embroiled in violent conflicts with other palm oil companies. The community even saw four of its community members killed between 2010 and 2015.

“I’m aware that I could be targeted with violence one day, and I may be sued for my activism,” Natthapan says. “The worst-case scenario would be an assassination.”

Santi Pattana’s peace only lasted until 2020, and the land rights activist saw her fears realised.

On 20 October, a gunman broke into the house of Dam Onmuang, a core leader of the Santi Pattana community, and fired a gun at him. Defying the odds, Dam dodged the bullet and escaped the shooter.

A police investigation later found that the gunman was living not far from the Santi Pattana community. He had no previous conflict with Dam before the attempted murder, making people in the community conclude that the incident links to the land conflict.

Natthapan was shaken by the incident that served as a grim reminder for the community to stay vigilant.

“But I try to look at the world positively,” Natthapan says. “It is worth taking these risks because the return is precious – the future life security of my community members and their children.”

“They don’t need to worry that someone will take away their land,” she says. “But if I, or other land rights defenders, aren’t at the frontline of the movement, the land of the future generations may fall into the hands of private companies.”

She sees the SPFT movement as a way to create “a collective culture,” in which all community members exist and collaborate to protect their land and thrive together.

Natthapan, who is openly gay, has a partner who lives in the same community and supports her in everything she does, professionally and spiritually. She says she has never felt discriminated against for her identity by the other community members.

“They value what I do, not how I look. They make me feel honoured to be part of their team,” she says. “They offer me a home where I can be my true self, and so I want to protect this home even more.”

Paritta Wangkiat is a Thai journalist, originally from Phuket but residing in Bangkok. She works regularly for a variety of local and international media.

Luke Duggleby is a Bangkok based photojournalist who has photographed the work and struggle of SPFT since 2015. 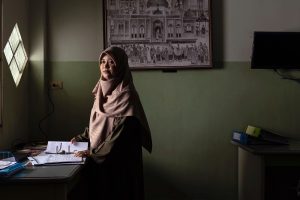 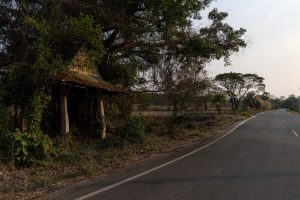 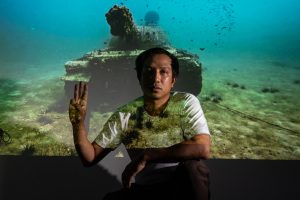